On March 9, a Free Anwar petition entitled, “Make the release of Malaysian Opposition Leader Anwar Ibrahim from prison a top priority for US policy toward Malaysia” was removed from the White House portal.

In response to the matter, PKR Vice President, Tian Chua tweeted as below, blaming the Malaysian government for the removal of the petition. 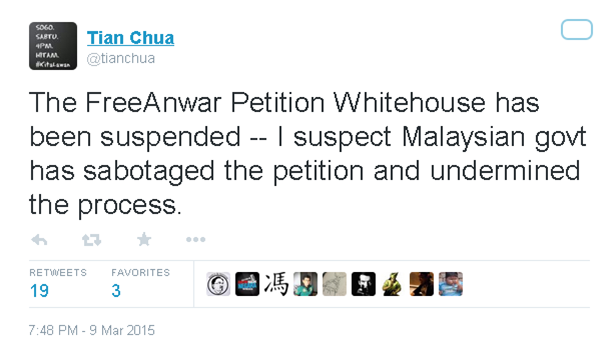 On March 10, the petition was restored, and Astro Awani published an official statement from the U.S. Embassy statement saying:

There were multiple petitions related to this issue, and after follow-up assessment, the White House determined that the petition it removed was not the one that contained fraudulent signatures.

To account for the error, the White House has since re-enabled the petition titled “Make the Release of Malaysian Opposition Leader Anwar Ibrahim from Prison a Top Priority for U.S. Policy toward Malaysia,” and is extending the deadline to account for the time lost while the petition was disabled.

No signatures were removed.”

Has Tian Chua admitted that he was wrong and apologises to the Malaysian government for wrongly blaming the government?

No, as always, he did not; in fact, this is not the first time he made wild such accusation towards the government of Malaysia.

This is another defamatory attempt to disrepute the the government of Malaysia by Tian Chua.

Karpal Singh once said that, “Anwar Ibrahim harus bertaubat”; so Tian Chua must repent and stop sending spiteful tweets or making malicious allegations towards the government.