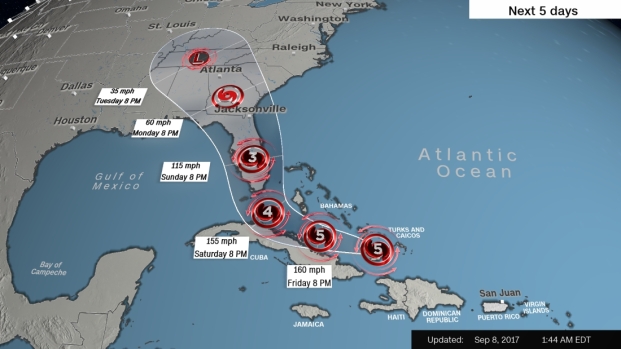 NBC News reported that at least 12 people were killed due to the hurricane that had caused vast devastation in the Caribbean islands.

Florida is braced for a possible direct hit that could cause a devastating damage to the southern part of the state.

CNN reported that the National Hurricane Center said Irma will make landfall in southern Florida as a dangerous major hurricane and has issued hurricane and storm surge warnings for South Florida including from Jupiter Inlet on the east coast of the state and southward around the Florida Peninsula to Bonita Beach on the west coast.

NBC News also wrote that the National Weather Service said that “locations may be uninhabitable for weeks or months” due to extreme winds, adding that “structural damage to buildings, with many washing away” was possible in some coastal areas.

Hurricane Irma is one of the strongest Atlantic storms ever recorded as it caused massive destruction to multiple places including Barbuda, Puerto Rico, Turks, Caicos and others.

Below are some photos taken from CNN:

People walk through damage in Marigot, St. Martin, on Thursday, September 7. Hurricane Irma has devastated several islands in the Caribbean.

An aerial view of St. Martin on September 6.

An aerial view shows the damage that Hurricane Irma left on the Dutch side of the island of St. Martin.

A boat is washed onto shore in St. Martin.

Irma floods a beach in Marigot on September 6.