Lots of PR bloggers tried very hard to convince their readers that  the Saturday’s illegal demonstration, Black 505 was a big success.

They wrote that the pro UMNO or the pro government bloggers only uploaded ‘photo A’ (below) in their blogs to show that only a small number of people took part in the illegal Black 505 demonstration.

So, they posted ‘photo B’ which they claim is the actual photo of the big crowd.

Are they telling the truth?

Aerial shot of Padang Merbuk. (Photo from The Star Online) 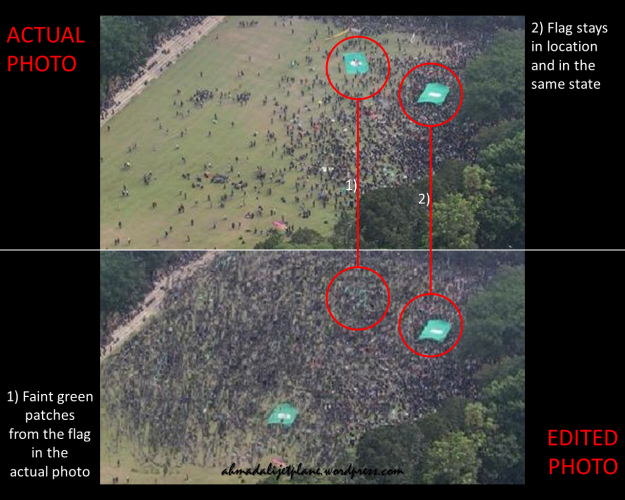 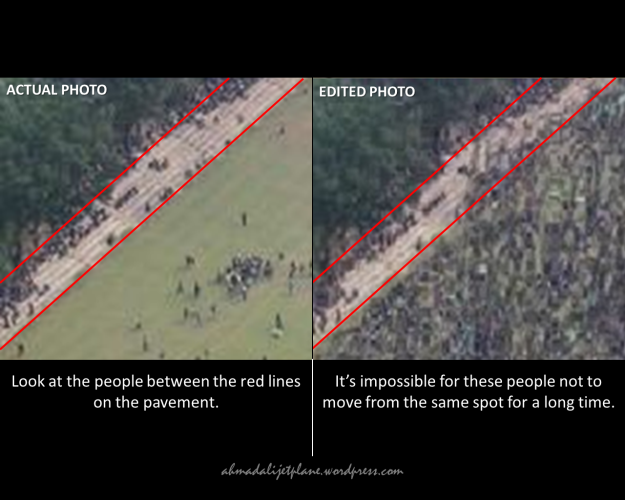 So, who actually cheated and who is the real photo spinner?

They did all these again and again …

Please look at how they edited the photo below during the #KL112; the edited photo shows people on the stadium roof and some others floating in the air!

Below is another edited Black 505 photo:

They did all these for their leader Anwar Ibrahim but at the same time they were cheated by Anwar who had a wonderful time during the swearing-in ceremony of Members of Parliament the next day while some of those demonstrators were busy demonstrating in the hot hazy day, laying on the road, hurting the police and doing crazy, violent and foolish things until some were detained by the police – please click here for: Black 505: Photos Of How Anwar Cheated His Supporters.

They are all the same, ‘Birds of a feather flock together’.

BLACK 505 demonstrators walked to the Malaysian parliament this morning to stage another illegal demonstration over there, ahead of the swearing-in ceremony of Members of Parliament today.

BLACK 505 is organised by the Malaysian opposition parties.

They were led by a PKR leader Badrul Hisham Shaharin or Chegubard and Hariss Ibrahim.

Police personnel have refrained from any violence, apart from pushing those trying to break the barrier to the ground.

Anyway, the demonstrators tried to breach the barrier formed by police personnel in front of Parliament, resulting in scuffles with the police.

Blogger AAKJ reported that a police officer was injured when he was punched by the demonstrators.

The police officer who was injured by the violent demonstrators.

At least 25 of the demonstrators had been arrested.

From the photos, I can see that the demonstrators are Malay.

They should be ashamed of themselves because their actions are against the teaching of Islam and the Malay values.

They are not kids any more and they must stop behaving like spoilt kids who love to throw tantrums even in the public places.

Their action are against the Malay values. Photo credit to Melanau Blogger

They should be ashamed of themselves! Photo credit to Melanau Blogger 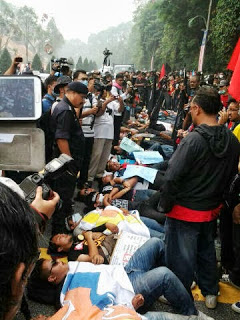 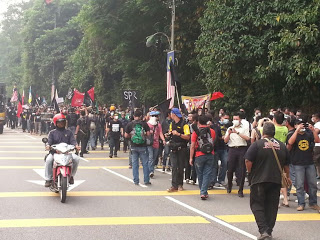 Say NO! to BLACK 505 and the Pakatan Rakyat!