[Yahoo News}- When it comes to taking photos on our iPhones, most of us are happy to take a snap that is remotely worthy of Instagram – before being modified with a dozen filters to ensure that we secure those all important likes.

But when it comes to the annual iPhone photography awards, it’s all a little different – with winners that are capable of capturing incredible shots of everyday life on earth.

Here’s a snapshot of this year’s winners.

A stirring photo of Standing Rock protestors braving the elements. It won top prize in the ‘America I know’ category (Picture: IPP)

Snapping something spectacular can be tricky in the wet, but these stunning photos are an exception to the rule.

Amateur macro-photographer František Dulík, 35, from Slovakia works as a technical engineer for medical devices when he is not capturing insects.

To get these unique photos of the bright and alien-looking mini beasts, Dulík will get up at 3 a.m. to spend five hours out with his camera over sunrise. (Caters News)

Amateur macro-photographer František Dulík, 35, from Slovakia works as a technical engineer for medical devices when he is not capturing insects. (Photo: František Dulík/Caters News)

“My favorite photo is the ladybird covered by dew, which took a lot of work but was worth it for the awards I’ve received.” (Photo: František Dulík/Caters News)

“I use natural and artificial backgrounds.” (Photo: František Dulík/Caters News)

František will get up at 3 a.m. to spend five hours out with his camera over sunrise. (Photo: František Dulík/Caters News)

Snapping something spectacular can be tricky in the wet, but these stunning photos are an exception to the rule. (Photo: František Dulík/Caters News)

“Fishpond nearby Markušovce is rich for lot of species of insect.” (Photo: František Dulík/Caters News)

“But I prefer it to be natural background in autumn with the colors putting the finishing touch to beautiful pictures.” (Photo: František Dulík/Caters News)

Dulík said: “Most of them I took near fishpond, nearby Markusovce village, where I usually go early morning on Sundays.” (Photo: František Dulík/Caters News) 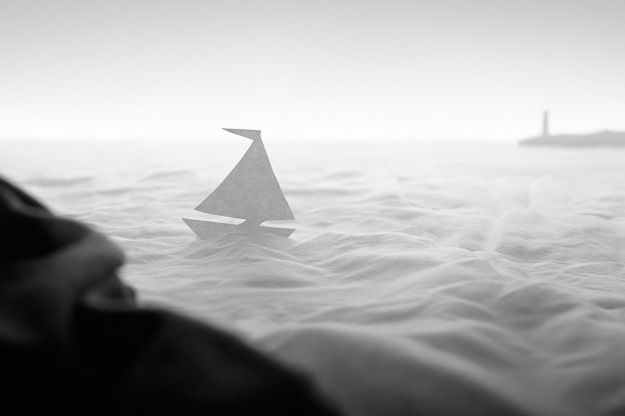 A paper boat bobs along a fabric sea in this surreal picture. (Sergey Dibtsev)

(Yahoo News) – The first winners of the 2017 Sony World Photography Awards have been announced.

10 extraordinary pictures have been selected as the winners of the ‘Open’ category of the competition, selected from a pool of more than 100,000 entries.

Journalist and photographer Damien Deomolder, chair of the Open competition, said: ‘It has been a pleasure and an inspiration to be exposed to such a volume of great work, and a privilege too that I could share in the personal moments, the joys, tears, life and losses of photographers from all around the globe who recorded their experiences through their pictures.’

The winners of the National Awards, a global contest to find best images taken by photographers in 66 countries, have also been announced.

This year the competition expanded to Cambodia, Nepal, Pakistan, Qatar, Saudi Arabia, Sri Lanka and the United Arab Emirates for the first time.

Here are some of the most spectacular pictures, taken by both amateur and professional photographers.

A figure emerges from a foggy night in Tarvastu, Estonia. (Hendrik Mndla)

A mother whale teaches her child how to jump. (John Tao)

A Disney-movie castle is reflected in a purple lake in Slovenia. (Ales Krivec)

A child grins as he walks along a railway track sheltering under an umbrella. (Shabir Mian)

Three images lie on top of one another, showing a terrace of houses, a portrait of a woman and a pot of mint. (Miriam Strong)

An eerie image of skeletal trees was one of the Open categroy winners. (Hiroshi Tanita) 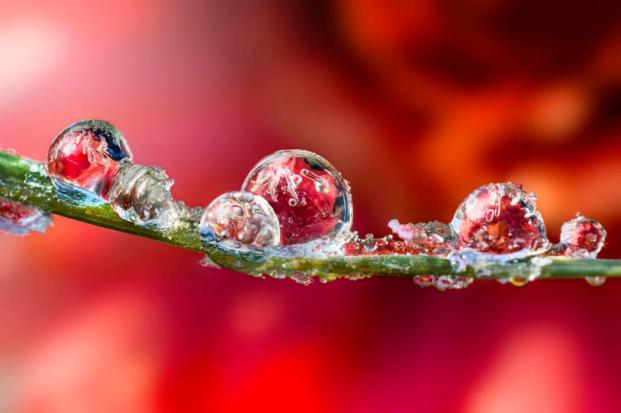 These are incredible photos of dew drops by an Italian photographer, Alberto Ghizzi Panizza who specializes in macro images.

The birthday cake : Photograph shows two kittens wearing dresses at a table with a birthday cake, 1914. (Photography by Harry Whittier Frees/Library of Congress)

These are adorable photos of cats dressed and posed in everyday human situations.

The photos were taken by an American photographer, Harry Whittier Frees date back to 1914.

The aviator : Photograph shows a kitten wearing a dress placed inside a toy glider, 1914. (Photography by Harry Whittier Frees/Library of Congress)

A joy ride : Photograph shows a puppy and three kittens wearing clothes with a toy horse and wagon, 1914. (Photography by Harry Whittier Frees/Library of Congress)

Pumping : Photograph shows a kitten wearing clothes and pumping water for a doll, 1915. (Photography by Harry Whittier Frees/Library of Congress)

The outing : Photograph shows a puppy wearing a dress and pushing three kittens in a wagon or stroller, 1914. (Photography by Harry Whittier Frees/Library of Congress)

The nurse : Photograph shows a puppy holding a kitten, 1914. (Photography by Harry Whittier Frees/Library of Congress)

Hanging up the wash : Photograph shows a kitten wearing a dress and hanging clothes on a clothesline, 1914. (Photography by Harry Whittier Frees/Library of Congress)

The cook : Photograph shows a kitten wearing a dress and stirring at a stove, 1914. (Photography by Harry Whittier Frees/Library of Congress)

The birthday cake : Photograph shows two kittens wearing dresses at a table with a birthday cake, 1914. (Photography by Harry Whittier Frees/Library of Congress)

The magazine moves the birthday celebration off its pages with the October 1st public launch of a photo-sharing platform, Your Shot (NGYourShot.com), that allows photography fans to connect with photographers and editors around virtual assignments, get direct feedback on their work and participate in a unique photography-based community.

Led by Richards and his magazine photo editor, Sadie Quarrier, the assignment invites photographers to share three images that convey how photography can help us explore our changing world.

Throughout the assignment, Richards and Quarrier will provide photo tips and feedback on the images that are submitted along with direction on what they feel will best help tell the story.

Their favourite photograph will be selected to appear in a future issue of National Geographic magazine.

Master of Disguise – Photograph and caption by Graham McGeorge, National Geographic Your Shot – Eastern Screech Owls like to take over woodpecker nests that have been dug out over the years in pine trees, which are the main species of tree at this swamp. Fish and Wildlife also paint a white ring around the base of a tree that has active nests in order to avoid when conducting controlled burns. Screech owls can range in height anywhere from 8-10 inches, so you have to have a sharp eye to find these little birds of prey. 8BIM

What a sheep! – Photograph and caption by Andres Beregovich, National Geographic Your Shot – wandering through Isla Riesco, I bumped into this almost forgotten ranch. Talking to the locals was fun. Then I asked whether I could photograph some of the processes. I couldn’t believe the size of this sheep when I first saw it. I almost couldn’t take the picture cause I was so impressed. 140KG Sheep (about 300 lbs) I’ve only seen this here.8BIM

Bromo Tengger National Park – Photograph and caption by Dennis Walton, National Geographic Your Shot – Nothing changes the landscape like a major volcano. I have visited Bromo Tengger National Park in Java, Indonesia many times. The usual drill is to climb to my favorite viewpoint in the early morning darkness and wait for sunrise. You never know what the new day will bring. This time it was an ash eruption of Mt Semeru highlighted by the warm colors of rising sun.

The Last Light – Photograph and caption by Somnath Chakraborty, National Geographic Your Shot – On a lazy eve i took this frame in unknown lane at Varanasi. A surreal light effect i got when i was walking through this lane. perhaps he was returning from his job and allowed me to take this frame on request. I took at least 5 frame out of which this one is cleared most.

Castelluccio di Norcia – Photograph and caption by Mauro Maione, National Geographic Your Shot – The Plains of Castelluccio are a karst plateau of the central-alluvial (Umbria-Marche Apennines), located in the Umbrian side of the Sibillini Mountains at the foot of Mount Carrier, within the territory of the town of Norcia, near the village of Castelluccio , and the National Park of Monti Sibillini, and that is the bottom of an ancient Apennine lake, now dried up, and known for its karst features.8BIM

Alive – Photograph and caption by Jonathan Tucker. National Geographic Your Shot – This is a self portrait I took of my self. This photo was taken under a glacier in Alaska. I hiked over two hours through swamps and up the side of a mountain to reach the Glacier itself..I spent around a hour walking on top of the glacier taking photos until I found this cave. The cave is formed from a water fall from the mountain that meets the glacier.When I first walked in the cave it took my breath away it was so amazing and scary at the same time especially when you hear the ice crack.

White Rim Storm – Photograph and caption by Klaus Priebe, National Geographic Your Shot – During a visit to the Canyon lands during the monsoon season of 2013 I chased storms during the week and had this little micro thunderstorm head right at me. It was a magical moment with the sun peaking through the clouds to the west and the storm producing rain and a few lightning bolts as it passed by me. 8BIM

Orange Liberty – Photograph and caption by Joy Acharyy, National Geographic Your Shot – These kids were playing the ghats of Ganges in Varanasi, India. The moment this kid saw me with my camera, she posed with the huge flag in her hand and made my day.

Belgian photographer, Boris Godfroid is a very talented photographer who had recently graduated from a film school.

He started shooting macro photography in 2008.

I guess Boris Godfroid chooses bugs as his subject because he likes bugs and knows a lot about them since he was a biology student.