Heavy rain in Kuala Lumpur this afternoon had caused flash floods in many areas across the city including major highways.

NST reported that among the worst hit areas are Jalan Bangsar, particularly near the LRT station and its vicinity.

(NST) JAKARTA: A strong 6.0 magnitude earthquake struck Indonesia early on Monday, the US Geological Survey (USGS) said, but no immediate damage or casualties were reported. The quake, which was relatively shallow, struck the northeastern corner of Kalimantan on the Indonesian part of Borneo island, 34 kilometres (21 miles) north of the coastal city of Tarakan, according to the USGS. The agency reported the quake hitting at a depth of 22 kilometres. Indonesia’s tsunami warning centre said there was no potential for the quake to trigger a tsunami. There were also no immediate reports of damage. The archipelago nation sits on the Pacific “Ring of Fire” where tectonic plates collide, causing frequent seismic and volcanic activity in the region. Last month, a 6.1-magnitude undersea earthquake struck eastern Indonesia that was felt in Saumlaki and prompted some residents to run outside, though the tremor had no tsunami potential, disaster officials said. Earlier in November, two powerful quakes struck Sumatra – an initial 6.1-magnitude undersea tremor followed hours later by a strong 6.4-magnitude quake.–AFP

I’m very sad to see such an incident and I have lots of things to question the bullies:

Is bullying part of liberalism, meaning that a person what to liberalise the existing laws and to express their freedom of expression?

We are human and we are civilised so we must understand that we have our responsibilities as a student, a human being and a citizen of our country; so we cannot be selfish, we have to think about others, we must make ourselves good and help others be good too. 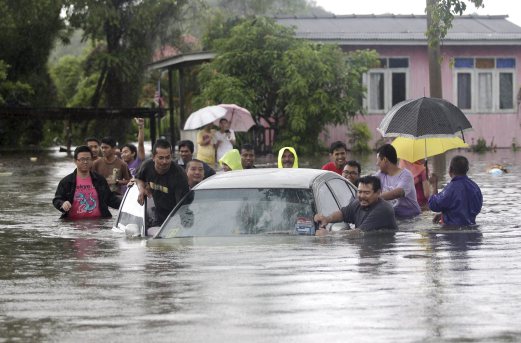 Berita Harian reported that least 15 houses in Pendang and Taman Sri Kota in Kuala Kedah were damaged by a tornado at about 4 p. m. today, during a heavy rain.

Among the affected areas are Kampung Alor Besar in Pendang and Taman Sri Kota in Kuala Kedah.

A report from NST says that:

“A source at the Meteorology Department confirmed that it was a landspout which can occur in instances of strong winds. A landspout is similar to a waterspout. The only difference is that it occurs over land” – NST

Landspout  a kind of tornado not associated with the mesocyclone of a thunderstorm.

Nobody was reportedly injured during the incident. 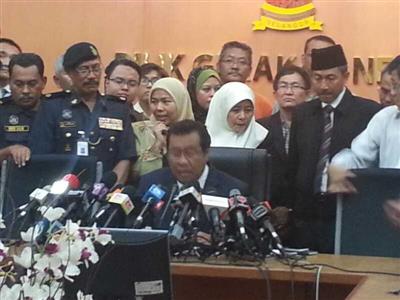 The consent was met earlier today in a meeting at Istana Alam Shah Klang.

Khalid said that the meeting held earlier was to inform the Sultan of his dismissal from PKR on August 9.

“The Sultan asked whether I can still command a majority support in the state assembly to which I said I do.

“The Royal Highness then adviced me to continue serving the state as the Menteri Besar and I will remain so until further notice,” he said during a press conference at the state secretariat building.

In regards to support from the state executive council members, Khalid said that the support from four PAS Exco members allowed him to continue to command the state.

“In accordance to article 52 2 (B) in the state constitution, the Menteri besar needs to have cooperation from at least four members of the Exco to continue leading the state.

“The support from PAS has allowed me to retain the command,” he said.

When asked whether he still command a majority support from the state assembly, Khalid said that people are open to test it.

Khalid however said there will be no emergency state assembly and the next sitting will be in November for the tabling of the state budget.

He said that he will meet with the remaining Exco members from DAP and PKR who had earlier vouched to follow the orders of their respective party to not support Khalid. The meeting will take place tomorrow.

“Under the article, the Menteri Besar has the authority to advice for any unwilling and uncooperative Exco members to be removed from their post.

“And if the Exco members from DAP and PKR would still want to follow orders from their party, then I can advice for them to be removed,” he said.

The prospect of joining PAS is still in consideration but before any decision can be made, Khalid said he will answer to all the allegations made against that was aimed to tarnish his image.

“Before I can consider joining PAS, I need to be sure that I am clean from any allegations so as not to bring any unwanted baggage with me.

“I will seek legal actions against those involved with the campaign to smear my image,” he said

When asked whether he would consider forming a unity government with assemblymen from the opposition, Khalid said, “Now is not the moment to think about that, the matter of running the state is more important right now,” he said – NST 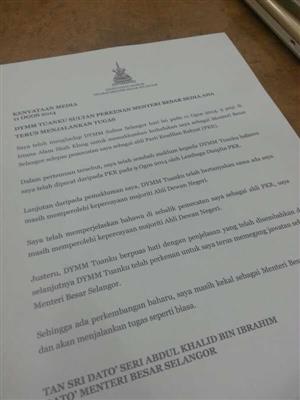 (NST) – KUALA LUMPUR : Malaysian investigators are checking the identity of four passengers on a missing Malaysia Airlines flight, but have not yet determined if the plane was downed by an attack, the country’s transport minister said.
“All the four names are with me,” Hishamuddin Hussein, who is also defence minister, told reporters.

He confirmed that Malaysian investigators had met counterparts from the U.S. FBI, and said the investigation was focusing on the entire passenger manifest.–Reuters 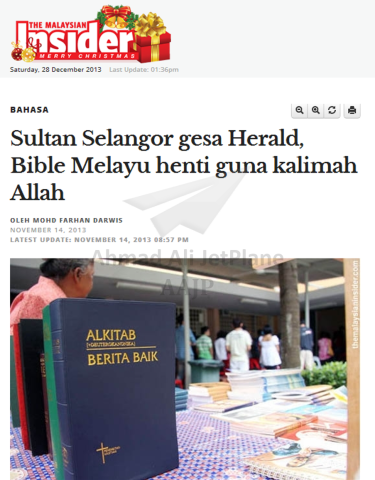 In the above article, Malaysian Insider reported that the Sultan of Selangor told the Herald and Malay Bible to stop using the word Allah as the translation of the word god.

NST reported that the Sultan of Selangor said:

“This is because ‘Kalimah Allah’ for the Muslims refers to the ‘One God’, prescribed in the Surah Al-Ikhlas (in the Al-Quran).
The people of Selangor, especially, must respect and adhere to the ‘muzakarah’ (decision) made by the National Fatwa Committee, Selangor Fatwa Committee, laws as well as the unanimous decision made by the Court of Appeal in the case involving the Home Minister and eight others versus the Titular Roman Catholic Archbishop of Kuala Lumpur on Oct 14, 2013.”

On October 14, 2013, the Court of Appeal ruled unanimously against allowing the Catholic Church to use the word “Allah” in its weekly publication the Herald; Justice Datuk Seri Mohamed Apandi Ali said:

“It is our common finding that the usage of the name ‘Allah’ is not an integral part of the faith and practice of Christianity. From such finding, we find no reason why the respondent is so adamant to use the name ‘Allah’ in their weekly publication. Such usage, if allowed, will inevitably cause confusion within the community.”

What he said is true for Allah is not the name of Christian god and the translation of the word god to the Malay language is tuhan and not Allah; in fact a lot of Christians outside of Malaysia think that it is wrong to call Christian god as Allah.

But some Christians in Selangor do not respect the Sultan’s decree and the ruling made by the Court of Appeal and still want to call their god Allah. 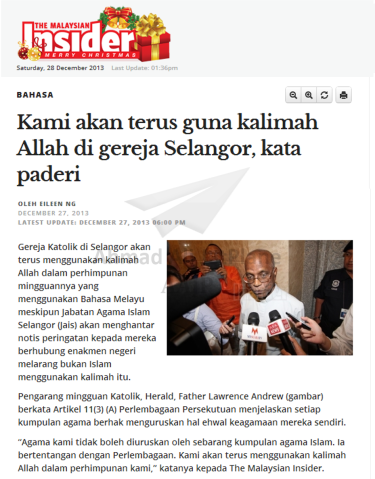 We must understand that as the head of state of Selangor, the Sultan of Selangor is also Selangor’s head of the religion of Islam; so it is the Sultan’s duty to protect Islam; and the Sultan has the rights to do so according the Federal Constitution of Malaysia.

And Article 11(4) of the Federal Constitution gives the Sultan Selangor the rights to control or restrict the propagation of any religious doctrine or belief among persons professing the religion of Islam in Selangor.

I really hope Selangor’s Menteri Besar has not forgotten the 10 undertakings that he pledged to the Sultan of Selangor on May 14, 2013. 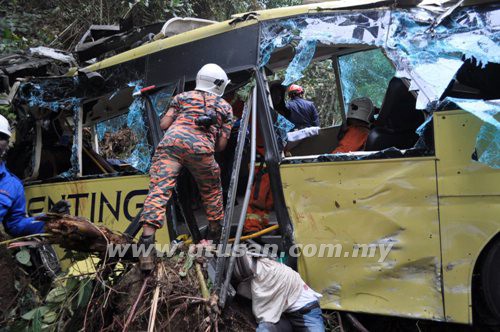 At least 37 people were killed while 16 others were injured when an express bus overturned and plunged into a ravine at Km 3.5 Jalan Genting, near Chin Swee Temple at 2.45pm today.

Utusan reported that the last body was recovered at 8:01 p.m..

NST reported that many of the victims were flung out of the bus as it rolled down the 60m ravine.

Emergency and rescue personnel brought in a crane and jerry-rigged a bucket recovery system to haul up the survivors and the dead. 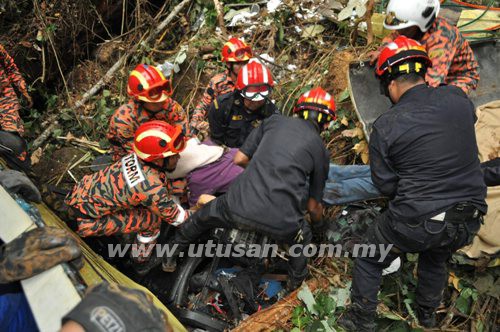