A brilliant moon is reflected in the water of Paraty Bay, Brazil. (Rafael Defavari)

Here are some of the brilliant photos that are shortlisted for the Astronomy Photographer of the Year 2016.

The Northern Lights arch over the sea in New Zealand. (Stephen Voss)

Light pollution from a fishing village blurs the edges of the Milky Away as it glows over Batu Pahat, Malaysia. (Yuyun Wang)

The Perseid Meteor Shower shoots across the sky in the early hours. This composite image features roughly 65 meteors captured by the photographer between 12:30am and 4:30am. (Brad Goldpaint)

The glow from a stargazer’s headlamp blends into the light of the Milky Way, arching over a mountain peak. (Nicholas Roemmelt)

The International Space Station pierces a path across concentric star trails as they spin over the trees in Harrogate, South Australia. (Scott Carnie-Bronca)

New stars are formed in the clouds of M8, also known as the Lagoon Nebula, situated some 5,000 light years from our planet. (Ivan Eder)

This cartoon-esque image shows a brightly coloured galaxy some 5,000 light years away from Earth as a superwind rips through it. (Ivan Eder)

The shadow of Manua Kea, the highest peak in Hawaii, is projected by the rising sun over the volcano, Hualalai, whilst a full moan sits in the sky above. (Sean Goebel)

A royal spoonbill perches on the forked branch of a tree, lit from behind by a glowing moon. (Andrew Caldwell)

The Northern Lights swish into the shape of a bird over a glassy lake in Olderdalen, Norway. (Jan R Olsen)

The tangled filaments of Pickering’s Triangle – a supernova remnant – trail through the night sky in megawatt colour. (Bob Franke)

The rusted swirls of the iron sculpture ‘Seven Magic Points’ in Brattebergan, Norway mirror the rippling aurora above. (Rune Engebø) 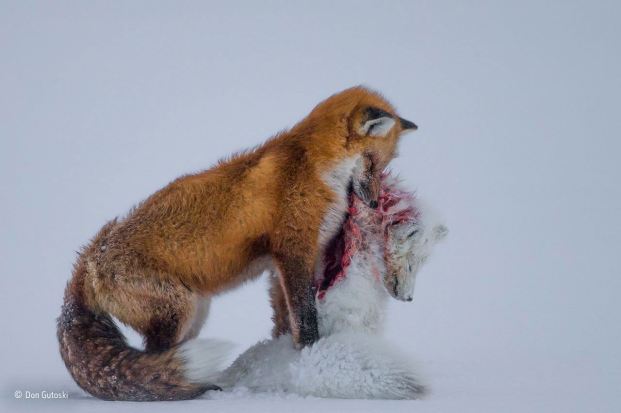 The overall winner of the competition was Canadian photographer Don Gutoski. The judges were moved by his picture of a red fox clutching a lifeless arctic fox in a rare example of the two larger of the two foxes hunting its smaller cousin. The picture was taken in the far north of Canada, where global warming has forced the two species to live in the same areas and compete for the same prey. (Don Gutoski / Wildlife Photographer of the Year 2015)

Wildlife Photographer of the Year Award, developed and produced by the Natural History Museum in London announced their winners.

Dan Gutoski from Canada was the overall winner for capturing a photo of a red fox eating an Arctic fox.

Here are nine of the winners’ submissions:

A massive Bryde’s whale rips through a shoal of sardines in the picture that won the Underwater category. The whales can eat hundreds of fish in one bite, and the feeding frenzy was captured by photographer Michael AW during the annual sardine run, when billions of sardines migrate along South Africa’s Wild Coast. (Michael AW / Wildlife Photographer of the Year 2015)

In Guilin China, big cats are drugged, have their claws removed and are forced to perform in shows by trainers wielding spiked metal poles. Britta Jaschinski won the Wildlife Photojournalist Single Image award by capturing the cruel and surreal nature of the circus show. (Britta Jaschinski / Wildlife Photographer of the Year 2015)

A barn swallow soars through a torn oil painting in this surreal image, captured by Juan Tapia at his farm in Spain. Juan hung the ripped painting in front of a storehouse window, knowing it was a spot the swallows often flew through. The resulting picture took the prize in the Impressions category. (Juan Tapia / Wildlife Photographer of the Year 2015)

A birdseye view of the Bahia de Cadiz National Park in Spain shows the marshes alive with bright colour, thanks to a bloom of microalgae, salt deposits and orangey-brown sediment. The picture took the top prize in the From The Sky category. (Pere Soler / Wildlife Photographer of the Year 2015)

Jonathan Jagot claimed victory in the 15 to 17-year-old photographer category with his shot of a flock of Scarlet Ibis gliding smoothly over a Brazilian sand dune. The birds are usually found in marshes and mangroves, so the sand is an usual background for their flight. (Jonathan Jagot / Wildlife Photographer of the Year 2015)

Photographer Amir Ben-Dov spent days observing the behaviour of these red-footed falcons in Israel before snapping this moment of interaction. The strange dynamic he caught won him the prize in the Birds category. (Amir Ben-Dov / Wildlife Photographer of the Year 2015)

In the 11 to 14 year-old photographer category, the top picture was taken in the far north of Norway during summer, when the sun shines 24 hours a day. Photographer Ondrej Pelánek visited with his father, and captured these male ruffs fighting for the attention of the females. (Ondrej-Pelánek / Wildlife Photographer of the Year 2015)

The ghostly silouette of a fox, taken in a Surrey garden, was the winning photograph in the Urban category. Richard Peters was aiming to capture the relationship between urban foxes and humans, despite not actually depicting either. (Richard Peter / Wildlife Photographer of the Year 2015)

Atlantic Ocean Road passes through an archipelago and links mainland Norway with the island of Averoy.
(DailyMail).

Road trip: Storseisundet Bridge is one of the features that lures thousands of tourists to the oceanfront route every year. (DailyMail).

For approaching motorists it appears that the ‘bridge to nowhere’ drops off into the sea, but it’s just an optical illusion. (DailyMail).

With a curve that protrudes over the Norwegian Sea, the 850-ft bridge plays a visual trick on approaching motorists. (DailyMail). 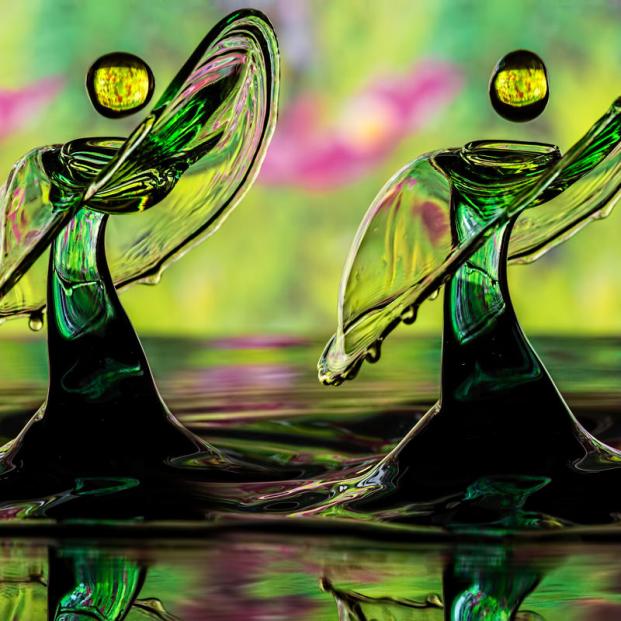 They show the water’s displacement as various liquids are being dropped in.

Ronny, who works full time as an IT administrator, set up his camera and flash rigs to capture the exact moment a droplet hit the surface, sometimes causing several drops to collide into each other. (TwoByTwoEditorial.co.uk) 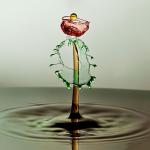 A tall rose made by the falling water (Photo by Ronny Tertnes/TwoByTwoEditorial.co.uk) 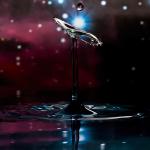 Looks like a water droplet with the city lights behind. (Photo by Ronny Tertnes/TwoByTwoEditorial.co.uk) 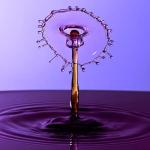 A tall splash of purple. (Photo by Ronny Tertnes/TwoByTwoEditorial.co.uk)

Photographer uses droplets of Milk to add a different texture to the liquid. (Photo by Ronny Tertnes/TwoByTwoEditorial.co.uk)

A tall spash in red. (Photo by Ronny Tertnes/TwoByTwoEditorial.co.uk) 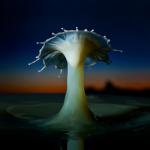 One of Ronny’s artworks where Ronny used smoke in addition to the water droplets. (Photo by Ronny Tertnes/TwoByTwoEditorial.co.uk)

One of Ronny’s artworks that looks like a heart. (Photo by Ronny Tertnes/TwoByTwoEditorial.co.uk)

A man standing on top of Kjeragbolten.

I love natural world especially when they are beautiful.

The picture above is a picture of a natural rock named Kjeragbolten, which is firmly placed between a 6 1/2-foot gap in the Kjerag mountain in Rogaland, Norway.

Kjeragbolten, which means ‘Kjerag Boulder’, is a natural sky bridge 3,228 feet (984m) above the stony abyss of Lysefjord.

It was estimated that Kjeragbolten was wedged into place after the Norwegian Glacier melted about 50,000 B.C. which is around the last Ice Age.

The same glacier carved the 26 miles long fjord of Lysefjord.

It is a popular hiking destination as it can be reached without any special climbing gear and hikers love to take their photos on Kjeragbolten.

There are more photos below …

Would you like to cross the natural skybridge of Kjeragbolten?

There are many ways to pose in this 6 1/2-foot gap–and all of which must be done carefully. Image by Yodod

Many visitors make the climb to Kjeragbolten with this “must take” photo in mind. Image by Yodod

It’s estimated that Kjeragbolten was wedged into place about 50,000 B.C., around the same time as the emergence of the first behaviorally modern humans. Image by Deeds

With its high altitude and sheer cliffs, it’s little wonder this area is very popular with BASE jumpers. Image by Yodod

The same large glacier that filled the valley and carved the fjords wedged Kjeragbolten into place during the last Ice Age. Image by Tijs Vrolix

With a 3,228-foot drop below, plenty of visitors need a little encouragement. Image by Tijs Vrolix

At 176.5 cubic feet, Kjeragbolten has much more substance than a tightrope, but balancing atop it is no less scary. Image by 7ty9

If you’re standing atop Kjeragbolten, and can bear to look down, this is what you’ll see. Image by WikiCommons

Kjeragbolten is wedged within a fjord named Lysefjord, which means “light fjord,” a reference to the pale color of the granite. Image by Leo-seta

Mountain sheep are common to the area, and apparently fearless. Image by 7ty9

A man standing on top of Kjeragbolten.