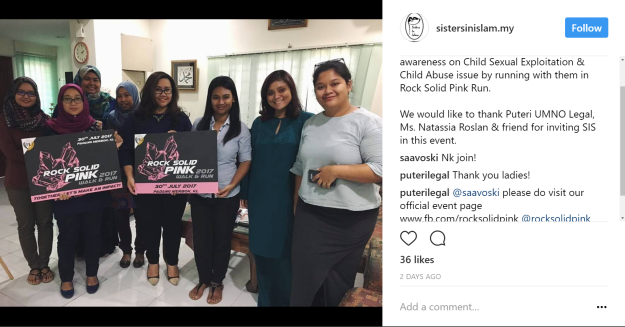 I was really shocked by the photo and the caption!

The big smiles shows that they are proud of their actions, how sad.

SIS Forum is against the amendments of the Act 355 to empower the Shariah Courts, the government’s stance on Kalimah Allah issue, fatwas, the Islamic authorities and other Islamic policies and the teaching of Islam.

On the other hand, SIS Forum fights for LGBT rights, liberalism, pluralism, wrong interpretation of the holy Quran and other matters against Islam.

Sis Forum is also a member of two anti-government coalition, BERSIH and COMANGO.

BERSIH that received funding from George Soros’ Open Society Institute (OSI) and National Democratic Institute (NDI), makes malicious and slanderous accusations not only towards UMNO but also towards PM Najib, and their main activity is organising illegal anti-government demonstrations in which they humiliate PM Najib and in its latest demonstration, BERSIH demonstrators are calling for PM Najib to step down.

COMANGO is a loose coalition of NGOs that made false accusations regarding human rights in Malaysia and demands the government of Malaysia to sign the UNHRC treaties that are against Islam, the Federal Constitution, the Rukun Negara (National Principles) and the laws of our country.

So, what is going on with Puteri UMNO and what are they trying to prove?

Is this an action of being politically mature or are they trying to stab UMNO in the back?

For their information, DAPSY will not be doing such thing together with PERKASA unless PERKASA makes a u-turn on its stance regarding Islam and the Malays.

What can they gain politically from inviting SIS Forum to their event?

If they think that political gain is not important for them despite they are an UMNO wing at the time when the general election is looming near; then I’m speechless.

Can’t those Puteri UMNO think of the consequences of their actions; that by working together with SIS Forum, they are giving the impression that they can tolerate and respect SIS Forum’s liberal and anti-government ideology?

Or are they really moving towards that path and away from UMNO’s ‘demi agama, bangsa dan tanahair’?

Next, perhaps they can invite leaders of SIS Forum as speakers for their programs.