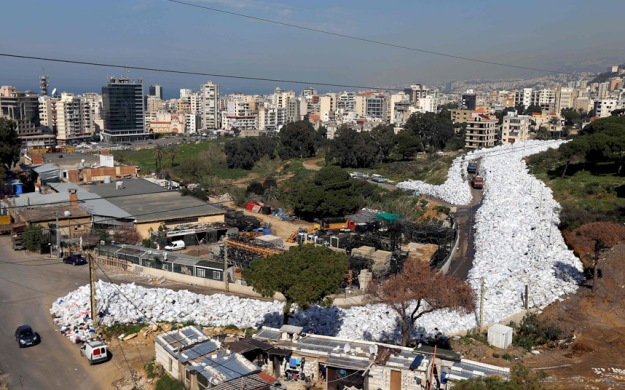 A river of trash?

Yes, there is a ‘river of trash’ in Beirut, the capital of Lebanon.

It is amazing to see trash arranged in a line like a river for miles through the city.

This was caused due to the closing of the country’s landfill in July 2015.

I think due to the political deadlock in Lebanon, its government is unable to function properly and that had caused lots of trouble for its people.

Due to the political crisis in Lebanon, the country has yet to elect a new president after the previous president, Michel Suleiman resigned on May 2014.

Al Jazeera, in its article, ‘What’s to become of Lebanon?’ reported that:

“But the Lebanese are a divided people, and that is a major cause for trepidation,” – Al Jazeera

That is what happened when its people are too divided and failed to work together in order to build a stronger nation.

Now protests were held in Beirut regarding the trash problems that injured hundreds of people including the police.

My question is, can protests solve this problem?

ome people see this as their human right, the right to make street protests when they are not happy.

But instead of going to the streets to protest, it is better if the people of Lebanon be united and make sure that they have a strong government that can take care of them.

This can happen anywhere in the world, including in Malaysia if our government is unable to function properly due to political instability.

Our government needs to solve problems that are actually created by people who are against the government instead of solving the real problems faced by our country, and this can bring us to destruction and cause chaos to Malaysia.

That is why we must be careful or we too will be facing problems like the people of Lebanon, or even worst like what happened to the people of Libya, Egypt and others.

Political differences must not be the reason to destroy our country, for if that happened it is the people who will be suffering.

The British firm chosen to export the rubbish to Russia for disposal, Chinook Urban Mining, failed to obtain documents proving Russia had agreed to accept the waste, annulling the deal, government agency the Council for Reconstruction and Development (CDR) said.