Anwar Ibrahim made the above press statement in reference to Eric Paulsen’s arrest for his spiteful  tweet that maliciously accused JAKIM for promoting extremism every Friday.

Reading Anwar Ibrahim’s statement makes me feel so irate because he had gone too far to politise and sensationalise this issue and maliciously condemning JAKIM, the authority and the government.

It is a defamatory attempt to disrepute the Islamic authorities and the Malaysian government.

So now Anwar is trying to say that the people who are doing their best to protect peace and harmony and prevent hatred between the multiracial Malaysians are paranoid?

Or could it be that it is Anwar himself who is paranoid because he is too troubled by all the problems that he’s facing?

Anwar wrote that Eric Paulsen did no offense by tweeting his spiteful tweet, when Eric Paulsen not only made false and wild accusation towards JAKIM but indirectly humiliates Islam and spews hatred towards the Muslims who support JAKIM.

“… the over-reaction to Paulsen’s tweet also signifies the rising tide of religious intolerance that appears to be engulfing our multi-racial multi-religious nation. And fanning the flames of communal suspicion, hatred and hostility are the usual suspects who owe their existence to political patronage.”

Anwar accused the authority for “over-reaction to Paulsen’s tweet”, so my questions are:

Anwar is actually looking for trouble and is spewing hatred by making such statement; and if the government is really in “a state of paranoia” as accused by him, he would already be charged in court.

I seriously wonder, how can Anwar Ibrahim, a person who used to be regarded as a great Muslim political leader, has the heart not only to support those who defame Islam but also to defame Islam and the Muslims in order to support them.

He wrote that, “Jakim sermons have on various occasions made unwarranted attacks”, which is untrue and humiliates Islam because what ever was said in JAKIM’s Friday sermons are in accordance with the teaching of Islam Ahli As-Sunnah Wa Al-Jama`ah.

Anwar Ibrahim must sit down and think back of the things that he had said during the time when he was the president of ABIM and realise that the Malaysian Muslims are not Liberal Muslims because Liberal Muslims do not follow the teaching of Islam.

Even Pope Francis says there are limits to freedom of speech and that, “One cannot provoke, one cannot insult other people’s faith, one cannot make fun of faith.” 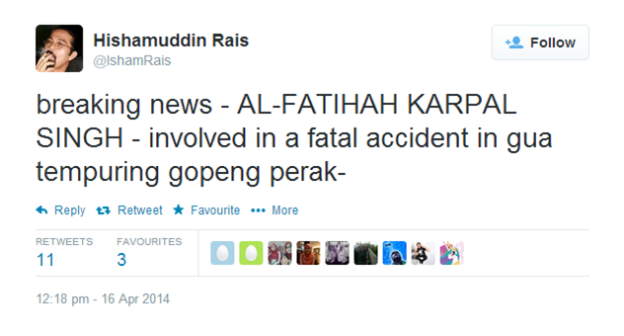 Is this the kind of person that one should listen to?

I just cannot understand how PAS leaders can share a stage with Hishamuddin and how PAS’s members who are all Muslims can listen and believe in his stories.

Hishamuddin has weird understanding about Islam, after all he is a very good friend of Anwar Ibrahim… 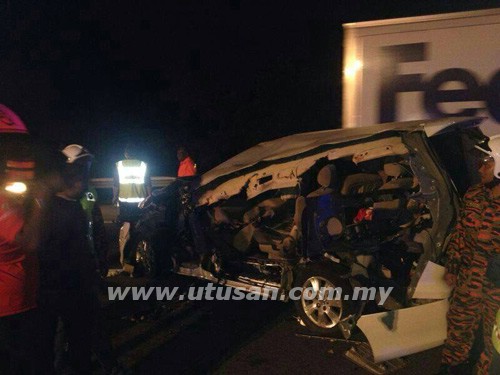 DAP’s Bukit Gelugor MP, Karpal Singh killed in a car accident near Gopeng, Perak on the North-South highway at 1.30am this morning.

He was on the way to Penang to attend a court hearing .

His assistant, Michael Cornandez was also killed in the accident.

The Star reported that the Toyota Alphard in which Karpal, his son Ramkarpal, Michael Cornandez, his driver Selvam and his Indonesian helper were travelling collided with a lorry before going out of control.

“Karpal: Deregister PAS and all race and religion-based parties, associations”, this is the title of an article from The Star that caught my attention.

GEORGE TOWN: Bukit Gelugor MP Karpal Singh has called for all race-based parties, including PAS, to be deregistered.

He said the time had come for all such political parties, as well as professional bodies formed according to racial and religious lines, to be deregistered.

“This applies to all political parties, including PAS, unfortunately,” said Karpal in a press conference Tuesday.

As the chairman of DAP, I don’t think Karpal should made that statement as PAS is an ally of DAP in Pakatan Rakyat.

It shows that Karpal does not respect PAS even after PAS has been helping DAP until some of PAS’s members went against PAS and vote for UMNO.

Anyway, will PAS agree with Karpal’s idea and allow people from other religion to join the party?

Is this part of DAP’s plan to humiliate PAS?

If such statement was made by an UMNO’s leader, PAS and Pakatan Rakyat will surely be very, very angry and their leaders will make all kinds of statements against it.

But now, will PAS dare to say anything since it was DAP’s Karpal Singh who made the statement?