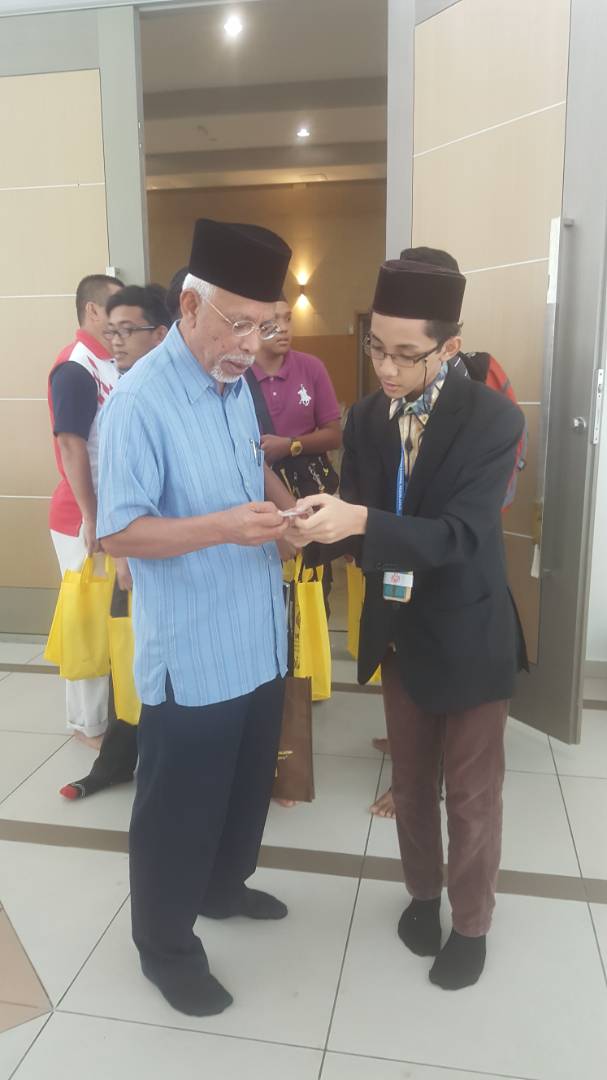 I was giving Tan Sri Shahrir my blog address.

I wrote this post on the night of September 10, 2017, but due to the internet problem while I was travelling, I only can post this article today after I got home from the six days trip.

This morning (Sunday September 10), I attended a program that was held at the beautiful Masjid Sultan Iskandar in Bandar Dato’ Onn, Johor Bahru where the Member of Parliament of Johor Bahru, Tan Sri Shahrir Abdul Samad was one of the speakers.

I wanted to speak to Tan Sri Shahrir every time I saw him in various programs in Johor, but this is the first time I had the opportunity to do so.

Tan Sri Shahrir is an interesting person to talk to, we had a casual talk on current issues without the formalities and a couple of times he teased us.

Tan Sri knew that we would be asking him about his infamous brother, PAN’s Khalid Samad whom he briefly mentioned during his speech and we also talked about the letter that Tun Dr Mahathir wrote to me in response to my blog article, Perjanjian DAP, PKR, PAN, PPBM Untuk Meminda Perkara 3(1)?

When Tan Sri Shahrir was appointed as the chairman of the Federal Land Development Authority (FELDA), my father excitedly told me that Prime Minister Najib had made a very smart decision.

Now I truly understand why my father thinks highly of Tan Sri Sharir; and why Tan Sri Shahrir could win the Parliamentary seat of Johor Bahru even as an independent candidate during Tun Dr Mahathir‘s days as the longest serving Prime Minister of Malaysia.

A small discussion with Tan Sri Shahrir after the program.

I was giving Tan Sri Shahrir my blog address.

High Court Judicial Commissioner Kamaludin Md Said held that Felda as a statutory body had the right to sue the parties under Section 15 (1) of the Land Development Act 1956.

“There is a statutory provision for the plaintiff (Felda) on the right to sue. Therefore, Felda can institute the civil proceedings (against the defendants). It can sue to protect its reputation,” he said after dismissing the preliminary issue raised in the matter.

Judicial Commissioner Kamaludin said Felda is entitled to enter judgment on liability in the civil dispute.

“Only Parliament, and not the court, can take away those rights (to sue),” he said.

JC Kamaludin ordered a senior assistant registrar to assess costs as well as aggravated and exemplary damages to be awarded to the plaintiffs for libel and malicious falsehood.

JC Kamaludin also granted an injunction to restrain the defendants from repeating the defamatory words.

“Apology is not allowed,” he added.

The defendants’ lead counsel Francis Pereira said that his clients had on Sept 30 admitted liability in respect of two defamatory articles.

Felda had on Aug 16, 2010 sued Dr Wan Azizah, her then deputy Dr Syed Husin Ali and four others for RM200mil over claims that the statutory body was bankrupt.

In the defamation claim, the plaintiffs – Felda and its investment company Felda Global Ventures Holdings Sdn Bhd – sued six defendants for false allegations over the process of buying the Felda building.

On Oct 26, 2010 Felda obtained judgment-in-default-of-appearance in the suit against Suara Keadilan’s publisher and printer.

Dzulkarnain had on Sept 30 had apologised to Felda and undertake to refrain from making any further allegations.

Felda has contended that it sued PKR as the party is responsible for the publication of the monthly newspaper Suara Keadilan which carried the two allegedly defamatory articles in its June 22-29, 2010 edition.