There was a man named Hakim who lived in a small house by a lake named Apple Lake. On the night of his birthday, Hakim went to a nice restaurant for dinner. He had a delicious dinner and he really enjoyed the chilli bread that was served with the chicken soup.

The next day, when Hakim was baking a loaf of bread, he decided to add ten tea spoons of red-hot chilli flakes to his bread dough because he wanted a very hot chilli bread. When it was done, he took it out from the oven and the aroma of the freshly baked bread filled his kitchen as he put the hot bread on his kitchen table.

He cut a slice of the bread and popped it into his mouth. His face suddenly turned red and he ran around his kitchen searching for his apple juice. He poured it into a glass, spilling half of the juice on the floor. He drank the apple juice as fast as he could. Then he poured another glass and drank the juice until he felt better.

He looked at the bread, wondering what to do with it. He walked out of the kitchen and stumbled upon some button mushrooms in his backyard garden. He  looked at the mushrooms and suddenly he got an idea. He could cook some mushroom soup so that he could eat it with the hot bread and reduce the spiciness of the bread.

He searched his cookbooks for a nice mushroom soup recipe. Then he found the one that he liked. He was so excited and he went to a grocery store to buy the ingredients for his mushroom soup.

As soon as he was back home, he prepared all the ingredients and started  to cook the soup. After an hour, he put the pot full of the freshly cooked mushroom soup on the dining table and added some fresh black pepper to the soup. He poured the soup into a bowl and tasted it. It was very, very tasty with chunky pieces of tasty mushrooms floating in the soup.

Then he took out a knife and sliced the chilli bread. He dipped it into the tasty mushroom soup, but again, his face turned red. The bread was still too hot even when he ate it together with the mushroom soup. Once again, he went around searching for his apple juice.

After he felt better, he thought hard about what should he do with the bread. Then he heard the sound of cats fighting outside his house. An idea struck in his mind and he took a piece of the bread. He went out and called for the cats. He placed the small piece of bread on a white plate and the hungry cats started eating. But then they all ran away for they too could not stand the spiciness of the bread.

So Hakim went back inside, thinking of what should he do. Then his phone rang and Hakim quickly ran to answer the phone. It was his old friend from India calling. His friend was in town and Hakim asked him if he would like to come to his house for dinner. Hakim’s friend agreed and told Hakim that he would appreciate something hot and spicy for he really missed the hot and spicy Indian food.

Hakim got an idea, he would serve the hot chilli bread with some tasty soup and some tasty meat pies for dinner.

His friend loved the hot chilli bread and told Hakim that it was the tastiest bread that he had ever tasted. Hakim was so happy because his old friend really enjoyed his chilli bread and he finished the whole loaf all by himself.

Hakim told his friend about what happened to him when he ate the hot chilli bread. As the old saying goes, ‘too much of anything is bad for you’. Hakim made a conclusion that even though he loved a hotter chilli bread than the ones he ate at the restaurant, he must not add too much chili flakes to his bread because it will be too hot for him.

The freshly baked tasty and beautiful Chicken And Cheese Braid, with delicious golden brown crust on the wire rack tray.

It was the day when we were finishing one of our 1000 pieces puzzle and we wanted a simple and light lunch.

So, my mother baked us the wonderful Chicken And Cheese Braid.

The golden brown crust is crunchy and the bread is delicious.

It was a very tasty lunch and we ate it with some salad.

Chicken And Cheese Braid is one of the tasty food that we can prepare for picnics and outings because it is not messy to eat.

Here are some photos of my mother’s Chicken and Cheese Braid.

My mother sliced the tasty loaf for our lunch.

Yummy! Tasty slices of my mother’s Chicken And Cheese Braid.

Tasty Chicken and Cheese braid with a slice of chicken peeking through the tiny hole in the braided loaf.

And today, I’m going to write about home made crumpets or drop scones….

My mother says that crumpets are very easy to make.

The other day when my mother was in a hurry to go out for some groceries she baked crumpets for our early lunch.

My mother mixed the ingredients, let it rest in the fridge for 30 minutes and cook them. 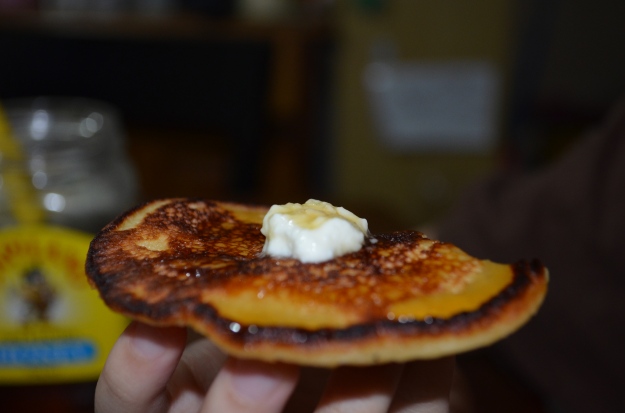 Crumpets are very tasty on their own but we can eat them with butter, jam, ice cream or anything that we like.

I topped them with whipped cream and honey and they tasted really good.

I wish I can have more of those delicious and tasty crumpets…..

I am enjoying my crumpet. 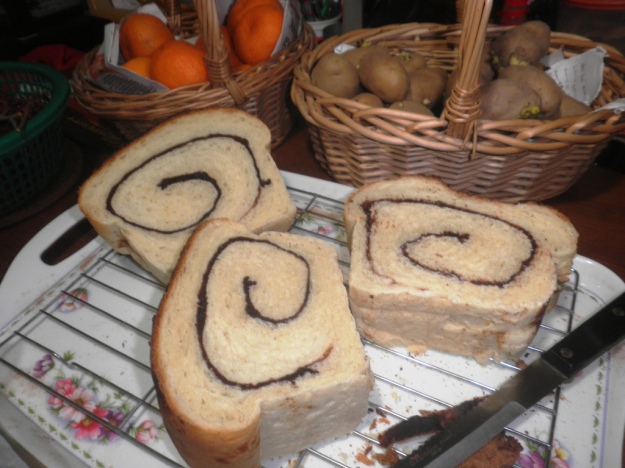 We bake our own breads and they are much more tastier and healthier than the ones from the grocery stores or the local bakeries.

And I love the aroma of freshly baked breads.

My mother bakes all kinds of breads and one of them is Cinnamon Bread.

Cinnamon Bread is very tasty and it is tastier if we toast the bread and eat them with butter and cinnamon sugar.

It is beautiful too because it have swirls in the middle of the loaf.

Anyway, even though I love cinnamons and I enjoy eating Cinnamon Bread, I actually prefer the whole wheat bread that I made.

My mother taught me how to make the whole wheat bread named, The Grant Loaf because it is one of the easiest bread to make 🙂

Apart from Cinnamon Bread, my mother also made Cinnamon Buns for us to enjoy. 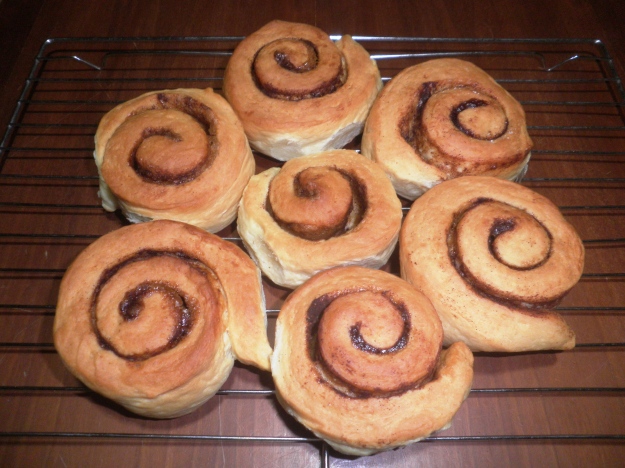 Hot and freshly baked Cinnamon Buns! Nice on its own or we can glanced it for  sweeter bites.