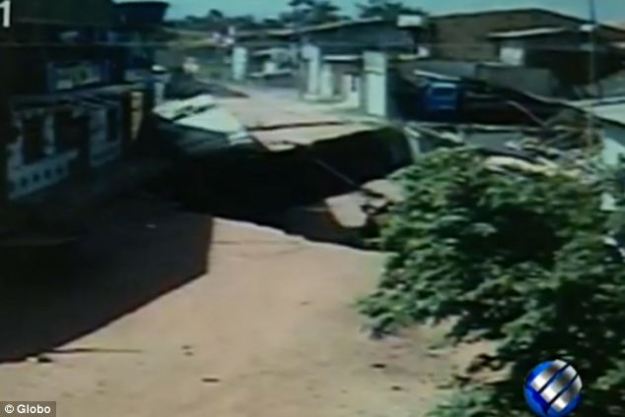 Terrifying: Residents in a town in the north of Brazil screamed in horror as they watched their homes disappear into massive sink holes on the weekend. MailOnline.

“Residents in a town in the north of Brazil screamed in horror as they watched their homes disappear into massive sink holes on the weekend. “

The CCTV footage below shows how a giant sinkhole, which is reportedly caused by water erosion, opened up and swallowed house after house the city of Abaetetuba, in the northern state of Para in Brazil.

Please watch the video closely to see how panic residents frantically running to a house on the right of the screen as a woman on the first floor resorted to desperate measures by throwing her child out of a window.

The child was caught and was quickly carried away by helpers.

The neighbours then brought a ladder to the house to help the woman escaped just before  the building was swallowed into the sinkhole.

Luckily, nobody was injured in the disaster.

The area was affected by the erosion borders the Maracatuíra river, which runs through the town.

According to environmental experts who have been inspecting the area, the construction of houses close to the river and the uncontrolled growth of the neighbourhood are at the root of the problem, and are the main cause of the tragedy.

The removal of vegetation from the an area close to the banks affects the soils rate of absorption.

Water that would have previously infiltrated tree and plant roots is no longer absorbed naturally and with nowhere to go soaks into and begins to erode the earth.