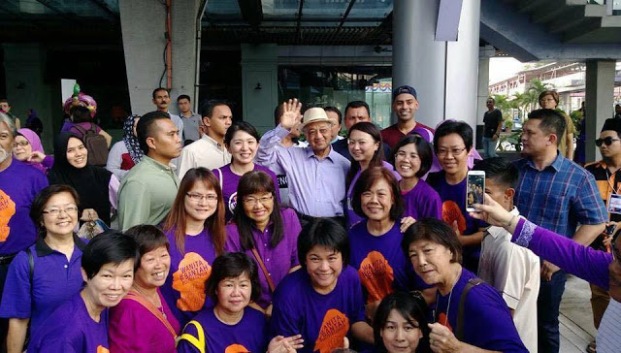 As I wrote in, “Tun Dr Mahathir (Tun M), From A Statesman To A Street Demonstrator“, the former Prime Minister of Malaysia, who was once admired as a statesman, a nationalist and a man of principle has turned into an anti-government street demonstrator after he left UMNO.

Now, it seems like Tun M, whom by now is a seasoned street demonstrator is always ready to take to the streets for what ever reasons as long as he can protest against the government and UMNO, the political party that had brought him to power.

It is really odd to see the man who had once introduced ‘Penerapan Nilai-Nilai Islam’ into his government policies is now a close friend of his once nemesis, the DAP’s Lim kit Siang who had arrogantly rebuked and condemned the holy Quran, claiming that the verse 120 of Surah Al-Baqarah causes religious hatred and blasted JAKIM for using the said verse in Khutbah Jumaat.

Recently, in a rally called Wanita #BantahPolitikToksik which was powered and supported by the oppositions parties and liberal movements that are fighting for anti-Islam agendas like COMANGO, G25, SIS Forum Bhd. Empower, WAMN and others, Tun was seen taking part in the what was advertised as a rally for women along side DAP leaders like Hannah Yeoh.

Tun Dr. Mahathir was accompanied by his wife Tun Dr. Siti Hasmah and some of his immediate family members, and his wife was one of the speakers, hence indicating that not only both Tuns endorsed the demands made by the demonstrators but they are supporting the demands which includes LGBT rights as written on the poster carried by their granddaughter, Ineza Roussille who is also Marina’s daughter.

Also seen at the rally were the infamous Siti Zabedah, Ambiga, Teresa Kok, Marina Mahathir and those who constantly slander the ideology of our country by saying that Malaysia is a secular country, fighting against the Federal Constitution that enshrines Malaysia as an Islamic country, questioning the constitutional duties of the government to protect the religion of Islam, trying to lower the position of Islam in Malaysia to the same level as other religions, making baseless and malicious accusations towards the Islamic authorities, fighting for the rights of LGBT and a lot more of other things.

Perhaps, COMANGO may consider making one of the Tuns their spokesperson for the coming UPR in Geneva.

I really wonder who is the real Tun; is it the person who he used to be or the person he is now.

Tun Siti Hasmah (centre) speaking, with her daughter Marina Mahathir (right) beside her

A poster photographed at the rally site. 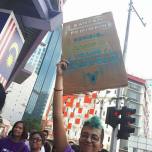 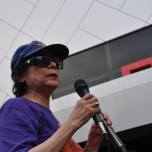 The infamous Siti Zabedah (centre) with her friends. 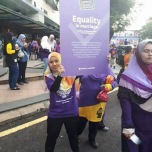 A protester holding up a poster demanding for equality in marriage.

Ambiga (centre, wearing a cap) with her fans and friends.