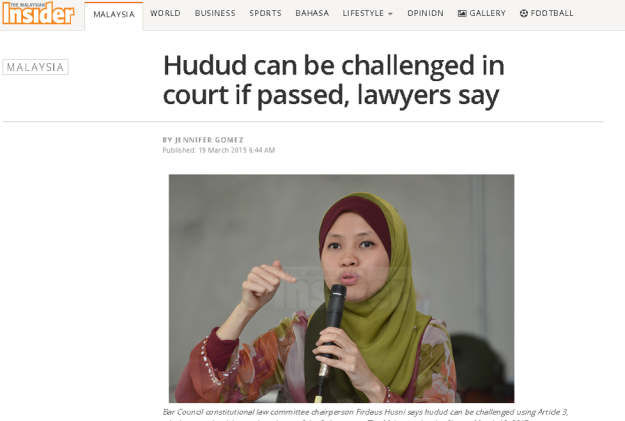 According to TMI, the articles are Articles 7, 8 and 3 of the Federal Constitution.

She went on saying:

“Instead, the 1993 Supreme Court case held it to mean that Islam in the context of Article 3 only relates to rituals and ceremonies,” –  The Malaysian Insider.

I guess she was referring to the case of Che Omar Che Soh v Public Prosecutor (1988) 2 MLJ 55; an old case which is no longer a good law; in fact the case was decided before the coming into effect of Article 121(1A) of the Federal Constitution.

Furthermore, in Che’ Omar bin Che’ Soh v Public Prosecutor, Tun Salleh Abbas did not say that Malaysia is a secular nation but Tun Salleh Abbas only said that secular laws were used in Malaysia.

After giving all her arguments of why Hudud is against the Federal Constitution of Malaysia, I have a question for the Bar Council; has the Bar Council forgotten about Articles 3(1), 10(4), 11(4), 181 and others when it fights for the LBGT rights, the freedom for the Muslims to change their religion or to become atheists and to abolish of the Sedition Act?

Indeed as lawyers they surely understand that in order for the Sedition Act to be removed, it needs the consent of nine Sultans because the Sedition Act is related to Article 10 (4); but they do not respect and sort of question the rights of the Sultan which is against the Article 181 of the Federal Constitution.

The Bar Council also supports COMANGO that are fighting for lots of things that are against the Federal Constitution in Geneva.

To simplify what I am trying to say, I think those Bar Council lawyers do not mind to change the Federal Constitution in order to achieve what they want.

If we compare Hudud to the rights to leave Islam, I think Hudud as the Islamic laws is more relevant in Malaysia since Islam is the religion of the Federation.

As a Muslim, Bar Council lawyer, Firdaus Husni must fight for Islam and not against Islam.