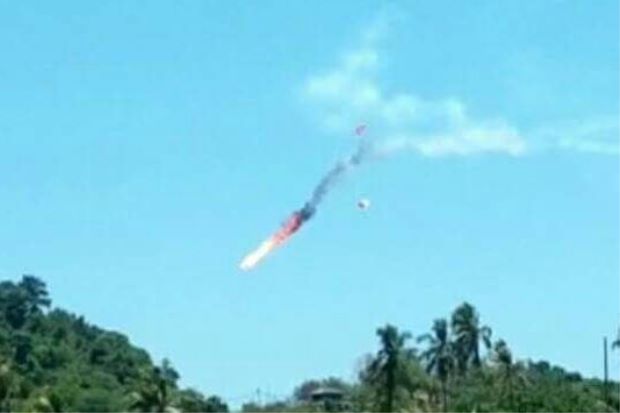 One of the planes is seen on fire after the collision during a practice run in Langkawi. Photo by Fire and Rescue Services Department

Two KT-1B aircraft of Indonesia’s Jupiter aerobatics team crashed when the two aircraft had clipped each other’s wings during display rehearsals for session for the Langkawi International Maritime and Aerospace (Lima’15) 2015 exhibition at about 2 P.M. just now.

The pilots of the two planes were landed safely after ejecting from their aircraft before the aircraft crashed onto the ground.

They are now under observation at the Langkawi Hospital.

BERNAMA reported that the organiser said that the search and rescue (SAR) team headed by the RMAF was on hand within minutes of the incident and successfully located the pilots in Kendawang, approximately 11.3 km away from the Mahsuri International Exhibition Centre.

BERNAMA also reported that, “One house and one parked car caught fire as result of the falling debris but Zulkeflee Abu Mutalib the owner was not at home at the time.”

One of the pilots is seen on a stretcher after being rescued by firemen following the crash in Langkawi. Photo by Fire and Rescue Services Department.