I learn about Behrang Move this morning… 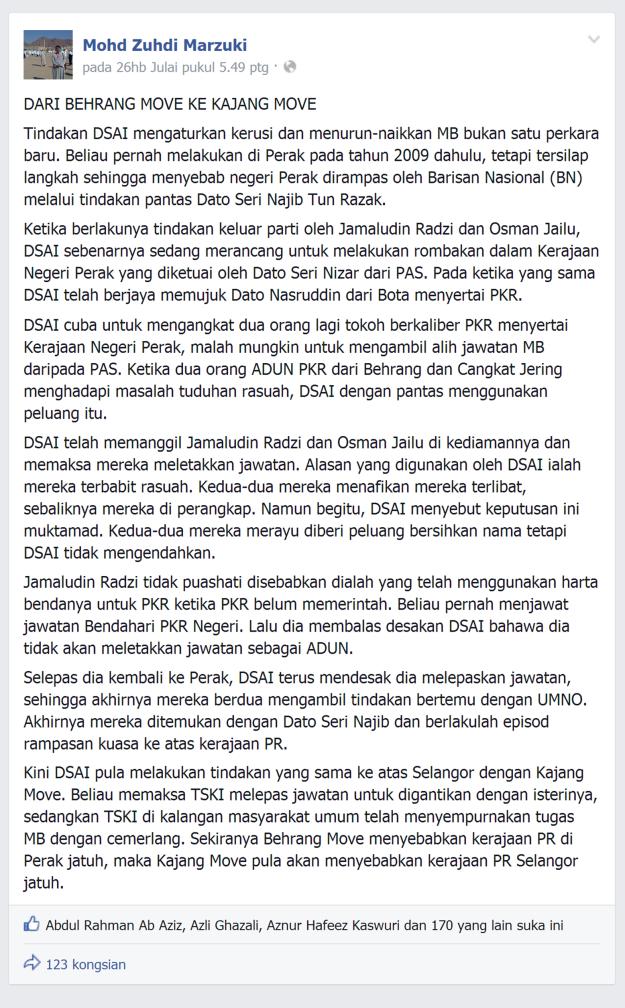 I was very surprised to read about it.

I did not know it was Behrang Move that caused Perak to fall back to BN.

Well, Anwar and his gang blamed UMNO for what had happened, accusing that UMNO bought Perak Aduns to control Perak.

And of course, I had no idea that Anwar was the one who was behind the Behrang Move.

After the Behrang Move failed, Anwar is now trying to use Kajang Move to force Selangor’s MB (Chief Minister) to resign his post so that Anwar’s own wife, Wan Azizah can become the new Selangor MB!

And they are all from the same political party, PKR where Anwar, his wife and his daughter are the bosses.

First Anwar ordered Kajang PKR ADUN Lee Chin Cheh to resign his seat so that Anwar himself can contest for the seat.

Actually he wanted to become the MB, but due to his court case, he could not contest in the Kajang Dun re-election.

So he replaced himself with his wife, Wan Azizah so that his wife will become the MB on his behalf.

Well, but it really happens; only in Anwar’s PKR!

So what is going to happen next?

Will Selangor fall to UMNO’s hands too because of Anwar’s greediness?

If so, Anwar and his gang will surely blame UMNO as the culprit as he always does…

And if he is still in control of PKR, I will not be surprised if he’ll launch more ‘moves’ in order to achieve his greedy dreams for power!