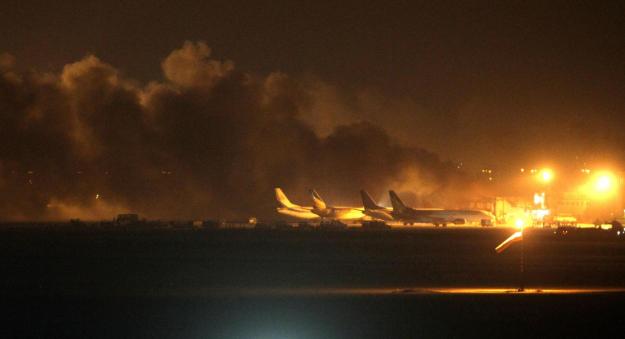 Ten gunmen disguised as police guards attacked a terminal at the Jinnah International Airport in Karachi, Pakistan with machine guns and a rocket launcher during a five-hour siege.

Rizwan Akhtar, the paramilitary Rangers chief, says all of the ten gunmen have been killed.

The attack that began late Sunday and ended before dawn on Monday killed at least 18 people.

During the incident, heavy gunfire and multiple explosions could be heard coming from the terminal, used for VIP flights and cargo.

A major fire rose from the airport, illuminating the night sky in an orange glow.

The spokesman for the Pakistani military, Gen. Asim Bajwa, said on Twitter that no aircraft were damaged.

All incoming flights were diverted and all flights operations were suspended.

The airport operations would be returned to the Civil Aviation Authority later Monday.

No one claimed responsibility for the attack.

A Pakistani soldier takes position at Jinnah International Airport where security forces are fighting with gunmen who disguised themselves as police guards and stormed a terminal used for VIPs and cargo, Sunday night, June 8, 2014, in Pakistan. (AP Photo/Shakil Adil)