There is so much mystery and so many speculations regarding the missing flight MH370.

And to add to the mystery, PKR’s Datuk Seri Anwar Ibrahim and his wife, Datin Seri Dr. Wan Azizah, gave contradict statements about their relationship with the MH370’s pilot, Captain Zaharie Ahmad Shah.

At 0:34 second of the video, Anwar Ibrahim told the parliament that he knows the missing MH370 pilot.

“About the MH370 incident, we have made (media) statements and prayed that everyone is safe. I know some of them (the passengers and crews), including the pilot.” 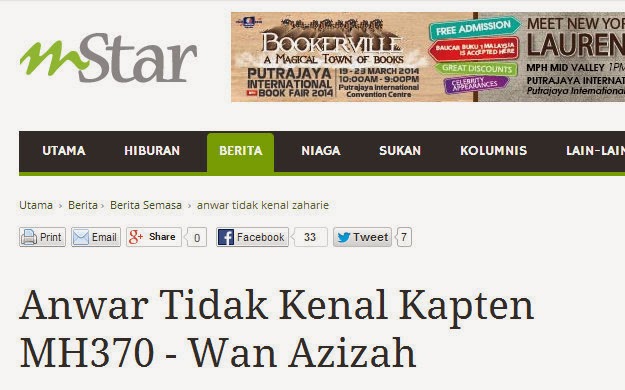 Then, the medias found out that Wan Azizah and Anwar were lying.

Both PKR leaders actually know Captain Zaharie who is their daughter in-law’s uncle. 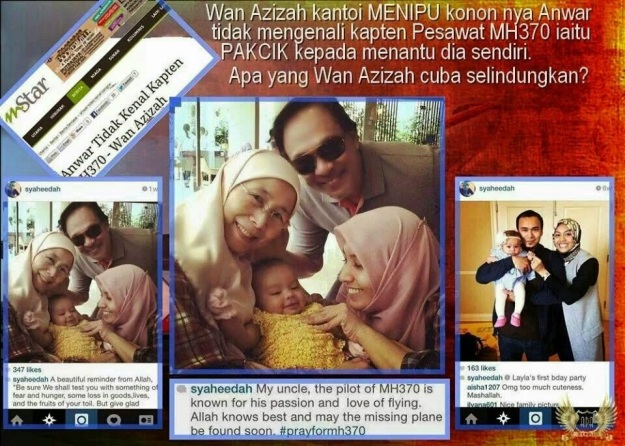 So, Anwar made another statement:

“I am not denying that he (Zaharie) is related to one of my in-laws and that I have met him on several occasions. In fact, he is a close friend of (PKR supreme council member and Subang MP) R. Sivarasa, as we said before.” – The Star.

But before admiting he knows the pilot, Datuk Seri Anwar Ibrahim had claimed that he did not know Captain Zaharie:

Opposition leader Datuk Seri Anwar Ibrahim, who previously claimed he did not know the pilot of missing MH370 aircraft, has now revealed that, “Captain Zaharie Ahmad Shah is related to one of my in-laws”. – The Star

“Anwar Ibrahim, Malaysia’s opposition leader, has stated he saw the pilot at party meetings but did not know him personally.” – Telegraph.co.uk

“Mr Ibrahim has previously said he did not recognise the pilot’s name.” – Mail Online

“I don’t recollect the name, but when the photographs were shown I remembered I had seen him at party meetings. He doesn’t hold positions in the party, but is an active member in the sense that he has been seen with the party’s parliamentary leaders, taking photographs with them,” – South China Morning Post

It is a mystery…

2 thoughts on “#MH370: The Mystery Of Captain Zaharie, Anwar And Azizah”