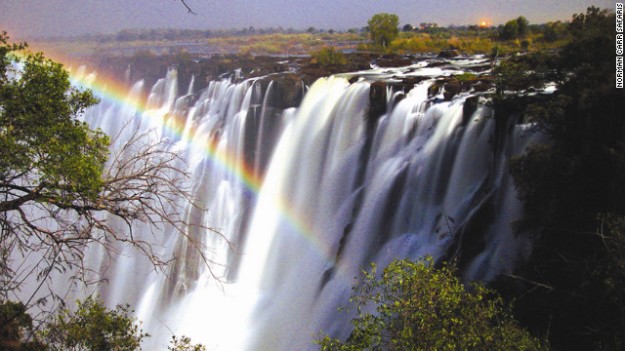 A rainbow created by the moon — definitely worth a look.

Our planet Earth is very beautiful.

There are so many beautiful places for us to visit and enjoy their beauty.

But these places will be gone if we do not take care of our planet and if there are wars around the world.

Let us take good care of our planet and please stop the wars.

Every evening, these stunning peaks lay on a glorious display of color, starting out bright yellow before turning an intense red that softens to indigo and violet before darkness finally envelops the mountains.

The Bay of Fundy in Nova Scotia is home to the highest tides in the world, creating a rare tidal bore — or giant wave — in the Shubenacadie River. Some adventurous types surf or canoe the wave as it moves upriver.

Some 230 meters beneath a stand of cactus-studded rocky slopes in New Mexico lies a wonderland of 117 caves formed when sulfuric acid dissolved the surrounding limestone.

AGRA, INDIA – MAY 28: The Taj Mahal is seen from the South on May 28, 2013 in Agra, India. Completed in 1643, the mausoleum was built by the Mughal emperor Shah Jahan in memory of his third wife, Mumtaz Mahal, who is buried there alongside Jahan.(Photo by Daniel Berehulak/Getty Images)

Lightning flashes during a thunderstorm early on September 13, 2011 in Las Vegas, Nevada. Stormy weather is expected to continue through Thursday.

The Rialto, the Bridge of Sighs, the vast expanse of San Marco look much as they did 400 years ago, but nothing evokes the mystery of La Serenissima quite like Santa Maria Salute looming out of the mist at the entrance to the Grand Canal.

They’re not exotic and in the European case they’re not even that pretty, but they are one of the most mesmerizing sights in nature.

Every year, armies of young backpackers flock to the ancient town of Fenghuang (which literally means “Phoenix”) in Hunan province, for its rich Miao and Tujia ethnic culture as well as a glorious photo opportunity.

Approximately 40% of Korea’s tea is produced in the rolling fields of Boseong, which have also provided the backdrop of many Korean dramas and films.

Sossusvlei means “the gathering place of water” but you’ll need to bring your own if you don’t want to dehydrate at this, one of Namibia’s most outstanding attractions.

Clean, secluded and easy to skip because it takes some effort to get here, the beaches of the Seychelles are the benchmarks against which others must be judged.

Scandinavia gives you a chance to see the most dazzling light display on Earth.

In the Lake District it’s OK to ponder like a poet.

Not your everyday ruins.

Seen one beach you’ve seen them all? Not a chance.

Your camera’s memory card might blow up inside this Iceland volcano, but otherwise it’s all cool.

Lucky us, the world didn’t end in 2012, so we still have time to see the Mayan ruins in Palenque.

Not always this clear, we know, but still Yosemite.

Orion, Pegasus and about a million of their friends are visible in Mackenzie Basin in New Zealand.

1 thought on “Beautiful Sights On This Incredible Planet From CNN”