Malaysian’s 13th General Election is over but the opposition parties in Pakatan Rakyat who lost the election wants to use street demonstrations, violence and other illegal ways to topple the legal government.

The demonstration is against the law because it is in conflict with the Peaceful Assembly Act 2012.

In fact most of the opposition’s demonstrations and rallies are illegal and against the law because the opposition parties’ leaders do not understand that we have to obey the laws of any country we are in.

That is why the opposition leaders complained against the Singapore government’s punishments towards the Pakatan Rakyat’s supporters who held an illegal demonstration in Singapore. (Please read here)

PKR claims that today’s illegal demonstration which will be held in Padang Merbok, Kuala Lumpur will be a peaceful demonstration.

Is it something like Bersih 2.0 and 3.0 when they blamed the police and the government for their violent acts? (Please read here)

Demonstrators thew all kinds of things towards a moving police car and attacking the car. The photo shows demonstrators kicking the car and someone climbed onto the car kicking the windscreen. They then hit the driver and a reporter who tried to help the bleeding policeman. Are they peaceful people?

Do they really want it to be peaceful or do they actually want to see clashes between the police and demonstrators? (Please read here)

I think their idea of a peaceful illegal street demonstrations are the kinds of demonstrations that were held in Cairo, Istanbul, and in Rio de Janeiro. 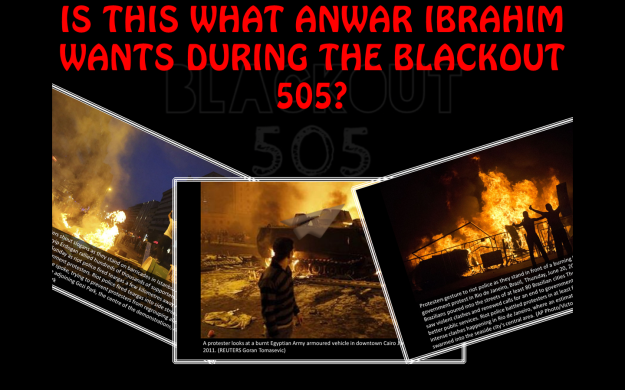 Maybe they will do crazy things to spark violence and to provoke the police so that they’ll be caught by the police. (Please read here)

Then they will start a fight, hoping that the foreign reporters will report that the Malaysian Police and government are bad, undemocratic and unfair toward the demonstrators and the oppositions.

As in Bersih 3.0, if they did not go through the barricades at Dataran Merdeka, the Federal Riot Unit (FRU) will not shoot tear gas and spray the water cannon. (Please read here)

Did the opposition leaders care about the demonstrators who supported them and might be killed in the stampede as they were pushed through the barricades into the Dataran Merdeka?

And today, with the hazardous haze problems in Malaysia, the opposition leaders are just happy to let their members and supporters risking their health by walking, running, shouting and doing crazy physical activities for hours in the hazardous haze that can cause them health problems.

Even McDonald had postpone their Olympic Run 2013 at the same location tomorrow due to the haze problem.

I just hope that they will not bring children along even with face masks.

That is why we should say, “NO!” to BLACKOUT 505 and to Pakatan Rakyat!