Astronaut Chris Hadfield and other astronauts are beaming back incredible photographs of Earth from aboard the International Space Station. 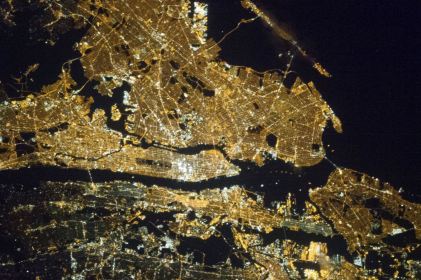 A night image of the greater New York City metropolitan area is seen in a NASA handout photo taken by a crew member onboard the Expedition 35 March 23, 2013. For orientation purposes, note that Manhattan runs horizontal through the frame from left to the midpoint and Central Park is just a little to the left of frame center. REUTERS/NASA/Handout (UNITED STATES – Tags: SCIENCE TECHNOLOGY) THIS IMAGE HAS BEEN SUPPLIED BY A THIRD PARTY. IT IS DISTRIBUTED, EXACTLY AS RECEIVED BY REUTERS, AS A SERVICE TO CLIENTS. FOR EDITORIAL USE ONLY. NOT FOR SALE FOR MARKETING OR ADVERTISING CAMPAIGNS

Boston at night, glowing under a trace of fog.

Arid fingers of sand-blasted rock look like they’re barely holding on against the hot Saharan wind.

A clearer view of Vancouver on a sunny day – can clearly see the ferry terminal, airport and many boats in the Inlet.

San Francisco Bay with a view of the Golden Gate Bridge

Tonight’s finale: Full Moon rising. So near, and yet

The wondrously wildly beautiful surface of our world (near the Etosha Pan in Africa).

Sandstorm on the edge of farming country in the American Northwest.

From seashells to galaxies to this storm, Nature loves spirals

Tonight’s finale: The pall of smoke clouds over Australia, as seen from orbit. A rare view of the bushfires’ effect

From London on the Thames to the sea to the world, so much of history came from this brightly-lit city

The Australian bushfires, this one near Burrinjuck Dam. Look closely and you can see the flames from orbit.

Thunderstorm from above. What animal to you see?

An island made for running laps. Off the coast of Indonesia