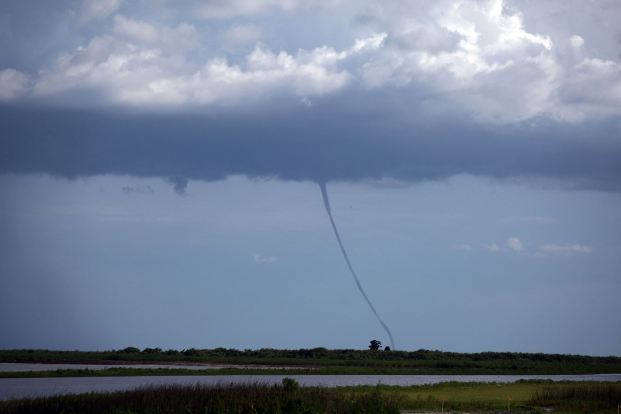 A waterspout touches down over Lake Okeechobee July 9, 2007 in Okeechobee, Florida.(Photo by Joe Raedle/Getty Images)

Here are photos of waterspouts around the world during the 21st century.

A waterspout is a tornado or twister over water instead of over the land.

Waterspout can cause disaster; if a waterspout hits a ship, it could crush them into pieces.

If a waterspout moves onshore, the National Weather Service issues a tornado warning, as some of them can cause significant damage and injuries to people.

A waterspout touches down over Lake Okeechobee July 9, 2007 in Okeechobee, Florida.(Photo by Joe Raedle/Getty Images)

A waterspout over the ocean forms a spectacle at the Rip Curl Pro Bells Beach on April 3, 2010 in Bells Beach, Australia. (Photo by Kirstin Scholtz/ASP via Getty Images)

A waterspout moves across ships at sea just several hundred meters south of the coast of Singapore May 25, 2007. REUTERS/Mia Shanley

Tourists on the Mediterranean coastal city of Antalya watch a waterspout on the sea October 19, 2006. REUTERS/Anatolian

A waterspout builds up off the southern Cypriot coastal town of Limassol, January 27 2003. REUTERS/Andreas Manolis

A waterspout spins over the Mediterranean Sea, near the southern city of Sidon, Lebanon, Thursday, Jan. 12, 2006. (AP Photo/Mohammed Zaatari)

Two water spouts can be seen about a mile off shore south of downtown Honolulu Monday, May 2, 2011. (AP Photo/Eugene Tanner)